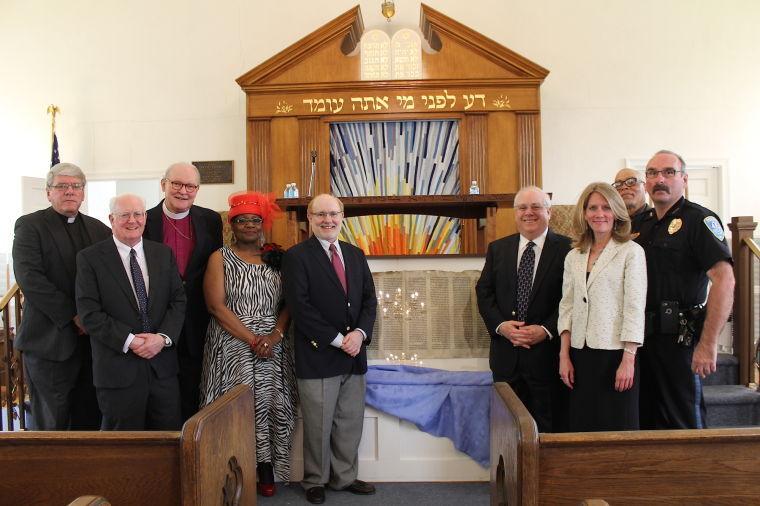 EASTON — Temple B’nai Israel of Easton on Sunday, April 19, unveiled and dedicated a framed section of a Torah scroll that was saved from destruction during the Holocaust amid World War II.

Temple B’nai Israel’s Rabbi Peter Hyman said the scroll, which he said is the most holy text in the Jewish tradition, was not just a Jewish text, but that it belongs to everyone.

“The remembrance of cruelty and inhumanity is not the particular and specific domain of one group of people. And unless we all recognize and share in the burden of changing the world, we make no effect in the world. Because what happens to you, happens to me. This is not just a Jewish text. This is our text … Their wisdom is transcendent, their meaning is universal, and they speak to us on so many levels,” Hyman said.

The text was written by hand on parchment, and smoke damage and damage from flames are visible at the top of the scroll. The text is from the first Book of Genesis.

Hyman said the framed scroll will have a prominent place in the congregation’s sacred collection.

The scroll was donated to the temple by the Rev. Kenneth Haubert.

Haubert said the scroll had been given to him by a rabbi who had met an older rabbi and Holocaust survivor during his visits to Nazi concentration camps in Europe. The older rabbi had saved the scroll from the Nazis and continued to keep it safe during World War II.

This is not a history book; it’s very real … I wasn’t being very Christian and perhaps even a little idolatrous by claiming this as my own. At best, I am a steward, a caretaker of it. And it was time to pass it on. I chose this temple. Why? Because I love your rabbi. He’s a very good friend … Dare I suggest that you don’t own this, though. Like me, you are merely stewards of it,” said Haubert.

Hyman said the scroll is important to young people’s understanding of history and hatred.

“There will come a time when World War II, and it’s fast becoming this, the Holocaust and World War II and the transformative realities of that time in history will become ancient history. And there will be no longer people we can greet and meet face to face. And it will be upon you and your generation and the generation to follow you to not only reteach the lessons, but to perpetuate the learning that comes out of that,” Hyman said.

Hyman said the framed scroll will hang in a prominent location in the new temple, when it is built.