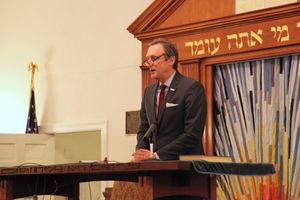 Mark Levin, executive director of the National Coalition Supporting Eurasian Jewry, addresses what he calls a rise in anti-Semitism as the first speaker in a lecture series hosted by Temple B’nai Israel, Wednesday, Feb. 4.

The lecture series is part of an effort to educate and engage the community about the importance of global events and issues, as well as address a rise in hostility and prejudice against Jews around the world, said Temple B’nai Israel’s Rabbi Peter Hyman.

The coalition is a voluntary, nonprofit agency created in 1971 that advocates on behalf of Jews in Russia, Ukraine, the Baltic States and Eurasia.

Levin has been with the coalition since the 1980s and has served three times as a public member of the U.S. delegation to the Organization on Security and Cooperation in Europe.

“As the world pays tribute to the end of a Nazi regime, there is also a growing sense of anxiety over the rise of anti-Semitism in Europe and the Middle East,” Levin said as he began his lecture, referring to the recent anniversary of the liberation of Nazi concentration camp Auschwitz.

Levin addressed anti-Semitism throughout eastern and western Europe including France, Ukraine, the Baltic states and Russia. He explained to those in attendance what he sees as the different types of anti-Semitism and their origins in each region. He said he and his colleagues are seeing not only traditional anti-Semitism ingrained in some cultures, but there are also anti-Jewish sentiments from Islamic groups and from far right and far left political groups, depending on the region.

“The latest terrorist attacks in Paris were committed by the marginalized members of France’s Muslim population. These are unfortunately disenfranchised young people, jobless and alienated by the mainstream culture, who in search of identity have dogmatically embraced a particular interpretation of Islam,” Levin said. “In western Europe in particular we see the rise of the so called new anti-Semitism, demonization … of the state of Israel.”

It is not only violent attacks like those in France Levin said, that are cause for concern, but anti-Semitic media as well. He pointed to Russian media as an example. “That doesn’t happen by accident, given that the Russian government controls almost the entire breadth of media in Russia. When messages are sent they are sent because the government wants those messages to be received by the larger public.”

Levin also said that anti-Semitism is not only a problem for Jewish communities, but for everyone. He called anti-Semitism a canary in the coal mine.

“It’s not just fighting anti-Semitism, it’s fighting ultra-nationalism, extremism, bigotry. It’s going after those that want to determine someone’s worth by their sex, their sexual preference, their race, their religion,” Levin said.

That sentiment was shared by Hyman, who explained why the rise of anti-Semitism was chosen as the subject for this year’s lecture series.

“We live in a global society. We are no longer isolated. We are no longer in a position that allows us to be unaware of what’s happening down the street, let alone on the other side of the world. What happens there affects us,” Hyman said. “When I say us, I don’t just think it’s in terms of the Jewish community. I think what happens in one side of the world affects us as Americans.”

Three more installments are scheduled in the series. Rabbi Steve Gutow, president and CEO of the Jewish Council for Public Affairs, was slated to speak Wednesday, Feb. 11. Oren Marmorstein, head of regional affairs at the Israeli Embassy in Washington, D.C., where he also serves as counselor for public and academic affairs, will speak Feb. 18. On Feb. 25, an official from the Anti-Defamation League will speak. Each lecture will be held at Temple B’nai Israel at 9 p.m. and is free to the community.