Berlin Marks Half a Century in Rabbinate 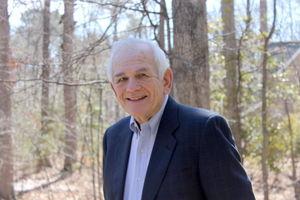 ST. MICHAELS — Donald Berlin likes to say he didn’t really decide to become a rabbi until about six months after he was ordained.

“I went through a lot of back and forth, not so much to the profession, but what did it mean,” Berlin said. “What did it mean to me?”

That was in 1965. Fifty years later, it’s safe to say he’s happy with the decision he made.

“I can tell you after 50 years, I was blessed. I really enjoyed my work,” Berlin said. “It provided me an opportunity to do so many different things that I’m not so sure I would’ve wanted to do any one of them all the time. It gave me an opportunity to preach, to lead worship, to work with youngsters in terms of religious education.”

Berlin said he decided to become a rabbi as a teenager. He grew up involved in Jewish life thanks to his parents, who he said weren’t strict in their religion but were deeply committed to their community.

“They were very involved with the Jewish community and had a very strong commitment and interest in Jewish life. So I did get that,” Berlin said. “They were my real role models, for which I’m very grateful.”

The St. Michaels resident is a native of Montreal, Canada, who made his way to America for graduate school in Cincinnati, Ohio. At the same time, his student pulpit was located in Staunton, Va., so for two years, Berlin would take an 11- or 12-hour, overnight train ride down each weekend. He said he would have returned to Canada given the chance, but at that time, he had to go where the opportunities were, and his movement was limited. He eventually became an American citizen in the country’s bicentennial year, 1976.

His work in Staunton as a student led him to his first professional congregation — a temple in Roanoke, Va., that effectively came looking for him when it found itself in need of a new rabbi. During his time there, Berlin worked part time at a veterans hospital, got trained as an addictions therapist, became involved with a mental health association and Jewish family service, and served on a county-appointed board that dealt with allocating funds to mental health organizations.

“Those things combined to give me a whole area of interest in behavioral stuff while serving the congregation and doing the kinds of things that rabbis do in congregations, which is to conduct services, preach sermons, run a religious school, do personal counseling, officiate at life cycle events,” Berlin said.

He also found other ways to keep himself busy.

“I represented the jewish community in many ways to the larger community as a rotarian and visited any number of churches,” Berlin said. “And I went and spoke to practically every college within 100 miles of Roanoke. Many of the students had never met a jew, let alone a rabbi, and so I became sort of a role model and a symbol.”

One of the things Berlin is most proud of from his time with that first congregation is his involvement in the civil rights movement. He said growing up in Canada he had lived around people who were critical of the American south and segregation, so living and working in that area, he made a commitment toward changing it.

When he agreed to the job, Berlin said, he made a deal with the congregation that he would accept it only if he was given the freedom to say what he wanted without being censored. They responded with the condition that in return, they didn’t have to listen.

“Actually, they did a lot of good things, my congregation. I was very proud of them. But it was a gradual process. I got involved little by little, and I never did anything to embarrass them,” Berlin said. “I was somewhat measured. I tried to work a little bit under the radar.”

After six years there, Berlin and his family — by then consisting of a wife, son and daughter — moved to Allentown, Pa., for five years before eventually settling in Baltimore for the next 23. Berlin said this was the largest congregation he had worked with until that point, made up of almost 1,200 families.

Berlin retired from this congregation in 1999 on his 63rd birthday. But his retirement didn’t mean he stopped working — he served as an administrator for the reform Jewish movement Washington, D.C., for a time and held a similar role in Chicago. He was an interim rabbi in Atlanta, a rabbi-in-residence at a 3,000-family congregation with four other rabbis on staff and, for several years, spent four to six weeks serving a congregation in San Juan, Puerto Rico.

Eventually, he stopped working but never stayed inactive for long. Currently, he serves as president of the National Association of Retired Reform Rabbis and has in the past served in leadership roles of both the Central Conference of American Rabbis and the Baltimore Board of Rabbis. He and his wife moved to St. Michaels in 2001, and on the Mid-Shore, he is involved with Chesapeake Chamber Music, the Talbot Association of Clergy and Laity, and the Academy for Lifelong Learning at the Chesapeake Bay Maritime Museum as both a student and instructor. He also is a member of Easton’s Temple B’nai Israel.

As Berlin takes time to reflect, he said one of the things he most enjoys is when he hears from people that his work or words have had an impact on their lives. He said he’s gotten more than a few calls from people from his past telling him he had a “profound effect” on their lives, including two men who later became president of the seminary from which he graduated.

“I enjoy the surprise of having touched someone’s life in ways that I never could have imagined,” Berlin said. “It’s humbling, frightening, exciting. It touches your ego when somebody feels that way.”

He said it’s also satisfying to think back on the work he’s done in various communities and some of the more intense things he’s been called upon to do, like officiating over the funeral of a Jewish police officer or the first funeral he ever conducted as a student, that of an infant.

“That’s more than 50 years ago, but I remember how scared I was and how emotionally impacted I was,” Berlin said.

Though his reasons for wanting to become a rabbi changed several times over the course of his life, he said he’s glad he stayed the course and has enjoyed where it has led him. After 50 years as a rabbi and 55 years of marriage to the woman he calls the most important part of who he is, Berlin is a happy man.

“I think it’s most satisfying to have been able to take my faith and become an advocate in a way in which other people are touched,” Berlin said. “When I say I am blessed, I say it with a special exclamation mark. It really is fortunate.”